Half in the Bag Episode 141: Black Panther

They don't think it was the best movie of the century?  Just WOW, who knew these guys were total RACIST!! /s

Challenge:  can you actually link me someone saying that if you dont like Black Panther that you're racist?

I did not claim someone said I was a racist for not liking Black Panther.  I did make mention of certain sites run by SJWs that ryme with Forgotten Potato saying they would censor negative comments about this movie as racist hate speech.

Care to provide an example of someone throwing a hissy fit over this movie because the cast is white?

Heh, you were lightning fast to walk back your underlying supposition; I also would have accepted ANYONE saying that ANYONE is racist for not liking Black Panther, which is exactly what you stated above.  I'll re-quote it here for you:  "They don't think it was the best movie of the century?  Just WOW, who knew these guys were total RACIST!! /s"

I will point out that some prickheads did start trying to spread fake news that they were assaulted because they were white at showings of Black Panther.  And, unlike you, I will back up what I say with links and evidence:

And obviously you saw Sargon's 40 minutes of complaining where HE legit brings up the phrase "black on black crime" when he's fucking talking about a comic book movie. Oh, and don't forget Ben Shapiro shitting all over a comic book movie because black audiences apparently love it while creating a strawman argument that it is being hailed as the best thing in black history.  He then invokes Martin Luther King, Jr., emancipation from slavery, and the Civil Rights movement, as though black people aren't allowed to be joyful about anything because of that.

So the lesson again is that when the pre-release reviews are nearly 100% positive, be skeptical of the hype. This is not the first time it happened, nor will it be the last. History repeats itself. Just as Attila crossed the Alps and stopped Napoleon Dynomite, so too shall "professional" movie critics give suspect reviews. 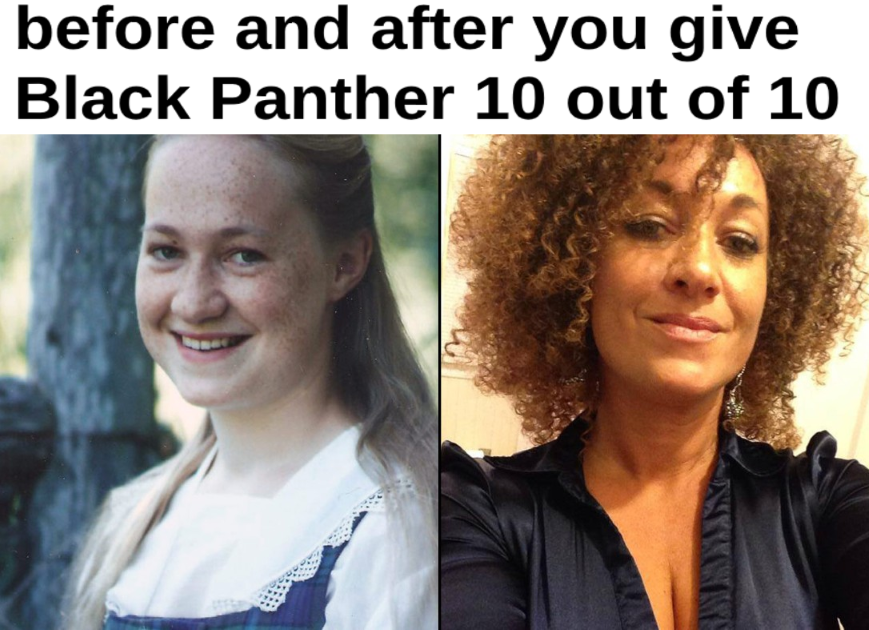 I notice the memes churning out from you but it very much seems like you haven't seen the movie at all.  Maybe you should watch it before shitting your pants to the brim?

lmao.. I literally don't know a single person who has polticized this movie or made it a race thing.. Its a fucking comic book movie hahahaha.

You must think about racism issues constantly