its from 5 years ago, wonder what the guy would say today if you asked him

also, does anyone know who said this "You won't get another comment from me"

This critic of JP is among those responsible for the scenes we see on liberal-controlled streets of people lying around surrounded by needles living in tents with stories in the paper commanding the public to respect their "homes" and let them shoot up in peace. Yeah, that fits.

"Gabor Mate from Twitter: I'm Jordan Peterson admirer myself but I'm not really attracted to the political side of him but bough I agree mostly about the radical left. I like his message about the link of meaning and responsibility and his biblical and mythological interpretations."

Mate interprets concern and horror as "Rage". See, there's nothing to be concerned about, nothing to be warning others about earnestly. Everything is proceeding great and people who dye on the street with a needle in their arm should be left to their fate, unless they want to come for one of my sponsored counseling sessions before heading out to shoot up again. All of JPs concern is repressed childhood rage.

LOL -  This description of Peterson fits someone else though really well. Oh God you can't make up a character like this guy....

Do a little introspection and ask yourself these question.

Yep, the guy is absolutely spot on.

Makes sense you would immediately agree with crackpot stuff like this - hilarious.

The Seductive, But Dangerous, Allure of Gabor Maté

It's all crackpot stuff about your "energy" - guy sounds like the same people who pushed this lunatic pseudo-science documentary and the people behind this hoax as well:

Kind of funny that you ridicule someone like Rupert Sheldrake but immediately endorse a crackpot like Gabe without looking into him at all.

lol, I don't indorse the man, it is the first time I heard of him. What he said about peterson is absolutely cock on.

Look at it like this: Even you may have a rational moment where you say something that makes sense* (although we yet have to experience that buit surely it would be delightful), this was one of his.

* a good opportunity would be the 3 questions I asked you in the other post, Puk Puk Pukaaak....

All that matters to you is that whatever is being said, regardless of the irrationality of the foundation for the statement, if it attacks someone you don't like then it is "cock on". Okay....

yeah, point me in the right direction and I answer "your questions", you never mentioned this in the post concerned, though, so this is just another diversion of yours to avoid enbarrassing yourself again, coward.

To help you with your memory blackout (click on the picture to get to the post and prove you are not a chicken): 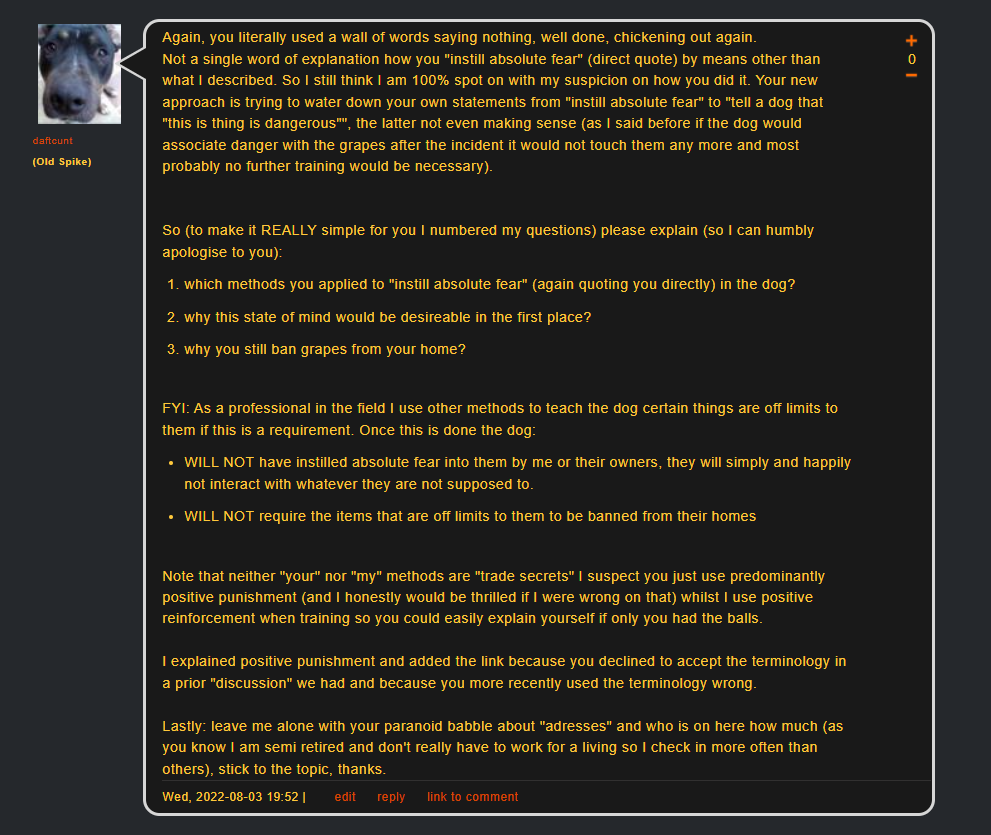 Oh so it was about Cujo - you go first, and then I'll read your questions. Won't even read 'em until you answer mine.

I believe I answered yours in this post. If not please point out what needs clarification.....

Why do you constantly decline to answer in the first place, it would be your ONE chance to educate me and maybe even embarrass me if you come up with something.

You haven't answered the three questions I posed to you, and you know what I'm talking about. Do I need to get a screencap for you? I don't answer you right now because any interaction with you is merely seen by you as an opportunity to waste my time - that's it. It makes you happy to know I'm spending time on you because you derive pleasure from sadism. You're sadist, coincidentally revelant to the three questions I asked you. But there's another reason, which I'll get to.

You can answer them honestly, and then I'll read your questions. I didn't say I would answer them. And "coincidentally" the subject that originally caused you to spaz out and post incest and pedo content to the site while referring to the family members of Spiked Nationals was my attempt to have a calm, reasonable, mutually educational conversation about dog training with you. When I wouldn't accept all of your declarations and you freaked as yourself and began attacking me and my sister all over this site while rate bombing my account, I started up the Super Friends monicker. This embarrassed you, you announced you were leaving the site, and then came back as Super Friends to commit several (well, in Canada anyway) crimes here before the account was nixed by Nakey. I still have all of the emails, in case you were wondering.

I probably won't answer your questions just to spare the site another repeat of your having an episode that defaces this site, puts you in trouble with the law, makes your family deeply concerned and generally just triggers a whole bunch of bad shit because your stability is not particularly solid. I have to be conscious of that too, Daft Cunt.

Maybe number them so I don't have to read through your brainless babble. You are again diverting, as always. You're a lowlife coward. In contrary to you I never had a sock account.

My three questions were numbered when I posed them to you.

Funny that you bring up sock accounts. I bring up Super Friends, and you start talking about sock accounts - so interesting. The reason it's interesting is because at the time you pulled your Super Friends stunt sock accounts were a big issue on Spiked. That's why I created one, and instantly announced "Hey, this is Skeptoid and this is my sock account - I want you guys to see how long I can operate this openly before any action is taken and then imagine what those who actually operate them clandestinely can get away with." That's my "sock account" you're referring to, which I created openly to demonstrate the problems with Spiked. Nakey wasn't happy with that demonstration, and the site was very much focused on the sock account problem, which I demonstrated, after that.

WHICH IS WHY at the time that you pulled your Super Friends stunt you first announced your departure from the site - that way you could create, or have someone else create, a new account and then you could operate your "Super Friends" account and not be accused of creating a sock account. I think you initially intended to drop Super Friends, come back as Daft Cunt, and say "ha ha that was me wasn't it funny?"

When you came on the site as Super Friends, I think a lot of those who were allied with you were initially onboard with the stunt, which actually could have been pretty funny and clever. Then you started actually posting the content, and I remember it was so funny because even your allies were like "Um, dude, wtf - WTF are you doing?" and you would respond with "What? What this is Skeptoid - he's....." and then more pedophilic and incenstuous content would spew out. And then your allies would respond "DUDE - stop this!" and you genuinely seemed hurt, and baffled, by the lack of support.

I think you originally intended to drop Super Friends after a period and then come back as Daft Cunt for a Ha ha ha ha moment. But the reaction to your actual, unfiltered, self (the portal you gave us into your mind) was so negative and disgusted that likely someone in your family, or perhaps a mental health profession who monitors you, explained to you why people reacted the way they did to your Super Friends, and why it would be best if you don't admit you were behind that account.

And so here we are today, with me asking you questions about Super Friends, and you responding with "I never had a sock account" - you still actually don't understand what you did wrong. So should I take this as a refusal then?

Here why don't I make it a bit easier for you. If you can answer this question honestly, as yourself, I will read your three questions about Cujo:

Why was the reaction to Super Friends so universally negative and why was the account banned permanently from the site?

* super frinds =/= me (he/she probably actually was a daft cunt, though)

* what are your questions?

without being so nice as Gabor, JP is a frustrated old Christian Canadian grifter who talks out his ass on most topics. He happens to be articulate & people confuse sounding intelligent with being informed & having intelligent things to say.