At the end of a five-nation tour of Asia, President Trump told reporters on Air Force One that he spoke with China's President Xi Jinping about three UCLA basketball players who were detained in the country (FOR FUCKING SHOPLIFTING).  Mr. Trump said Xi has "been terrific" in helping resolve the situation.

Something doesn't add up.  The left told me Trump was an "evil bigot" and a "racist" but then he goes a gets three black college kids out of serious trouble with a foreign nation.  Ah well, leftist hysteria has never really made sense.

Yeah, he seems like such an angel (here in this video where he is recounting a story directly into a video camera).

Shoulda let them rot in prison for a year or 2. Dumb asses.

Ya but they're sorry. They are just lucky it was China and not NK.

I wonder what this actually costs USA in the long term. It's a pretty small favour but so is a multi-billion-dollar business deal when it comes to negotiations between major countries. These dickheads should have been left there to rot. Going on a crime-spree in their situtation is unforgivable.

FAKE NEWS, Trump hates black people. This didn't happen. Where is the proof? Just because he says it, and they got to go home, and now they are with their families, doesn't mean he had anything to do with it. Everyone knows that you don't really serve time in China, they "share" the jail time, so you do less and get less of everything but everyone has something to do. Stop blowing things out of proportion. ~ Sarcasm

LOLOL Trumptards are out in force praising Don the Con. His thoughts and prayers template was hilarious for the mass shooting yesterday.........OOOOPS wrong mass shooting! This guy is a fucking joke.

After the mass shooting in California, he had a little old-man moment and gave T's and P's to the people from Texas again. Pathological lying, multiple personality disorders coupled with a thin skin and ego issues coupled with beyond early-onset dementia is resulting in some hilarious shit. The party is just getting started. Trump is that grandpa who won't give up his car keys when he shouldn't have been driving for a decade. The embarrassment continues with the Trump ball washers circle jerking over how great he is because he got three shoplifters released. He deserves credit, no doubt there.

11/5 after the mass shooting in Texas: 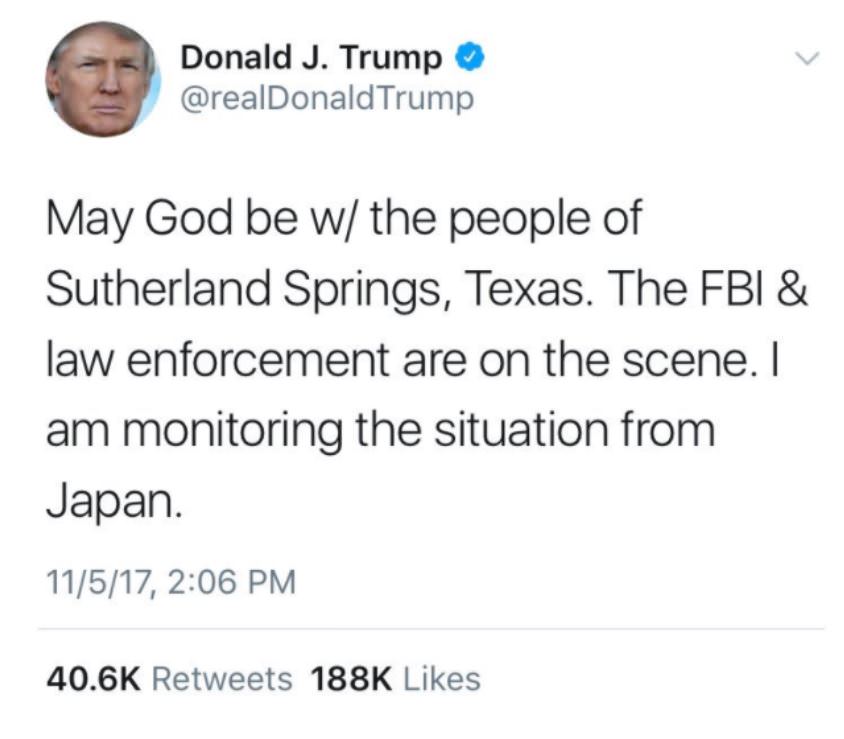 Today-his handlers made sure he deleted it of course: 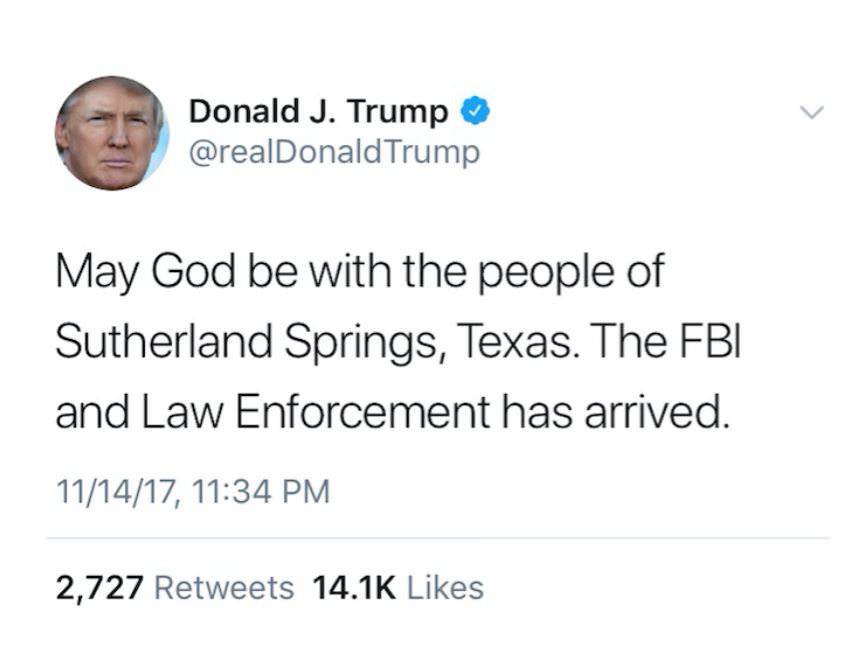 STOP LOOKING AT THAT THING HE DID THAT COUNTERS MY NARRATIVE!!!

INSTEAD, LOOK HERE AT THIS TWEET!!!  DRUMPF IS SO DUMB, RIGHT?  RIGHT?  LOOK HOW DUMB HIS TWEET IS.

Wearing a tactical vest and armed with extra magazines, the gunman attempted to enter classrooms at Rancho Tehama Elementary School.

I will predict that soon we will be hearing about the "extra magazine loop hole".  Who needs a banned standard capacity mag when you can just carry a bunch of extra California approved 10 rounders.

He could not get inside and left six minutes later, apparently frustrated, Johnston said.

When seconds count, cops are minutes away.

After leaving the school, the shooter intentionally crashed the pickup into a car. He exited the truck and gunned down at least one person there, Johnston said.

Of course this being Commiefornia the person he gunned down had a ZERO percent chance of defending thimselves since the all-knowing leftist politicans in California have seen to it that the ordinary citizenry is forbidden from going armed in public.

Eventually, two police officers encountered the gunman at an intersection. They returned fire, killing him, the assistant sheriff said.

You hear that guys?  EVENTUALLY the bad guy with a gun encountered a couple of good guys with guns and was put down like the rabbid dog he was.  I'm sure the good people of California can rest easy knowing that in the future they might be slaughtered like lambs by a man with mental health issues but EVENTUALLY armed agents of the State will show up and take care of the situation.

The definition of insanity is doing the same thing repeatedly expecting a different result.  I predict the answer to this latest example of gun control NOT working will again be to "blame the gun" and, if it is even possible, propose yet more laws for the next killer to violate on his way to the grave.

What in the holy fuck are you ranting about? The point is Trump had a major brain fart and is the president. Keep it simple. The guy used his template for after mass shootings and looked like a moron.

Drumpf is a nazi I hate that guy and you do too!
#IMWITHHER
HILLDAWGS IN SPIKED NATION REPRESENT!
#IMPEACHDRUMPF

Holy Shit you're right! Check this out:

I knew it! Good eye!