Izium has been liberated. Front line has collapsed.

Breif description of what the Ukrainian command is actually doing (now including maps with crayon annotations so even the village idiot can understand!)

The Ukrainians are very good at strategy. Specifically what they keep doing is forcing Russians to make choices that they don’t want to make, and putting them into situations where the outcomes of their choices are all bad.  That is an indicator of what makes them good at strategy (more precisely ‘operational art’) - they are dictating the pace and forcing the RA to respond to them. So what’s going on at the moment? In a sense, the only people who truly know how this will go are the Ukrainian general staff, and their US/UK colleagues working with them. However, credible OSINT specialists and other analysts have provided us with some probable scenarios of what is likely happening.

Ok - so over the last 3 months, the Ukr have been softening up Kherson - taking territory, gentle shaping of the battlefield. Then over the last month or so, they have begun heavily shaping the battlefield and destroying RA command and control, logistics and infrastructure.  This caused russia to strip out units from elsewhere in Ukraine to reinforce in Kherson, but it also meant that russia put lots of its troops on the wrong side of a river in Kherson. 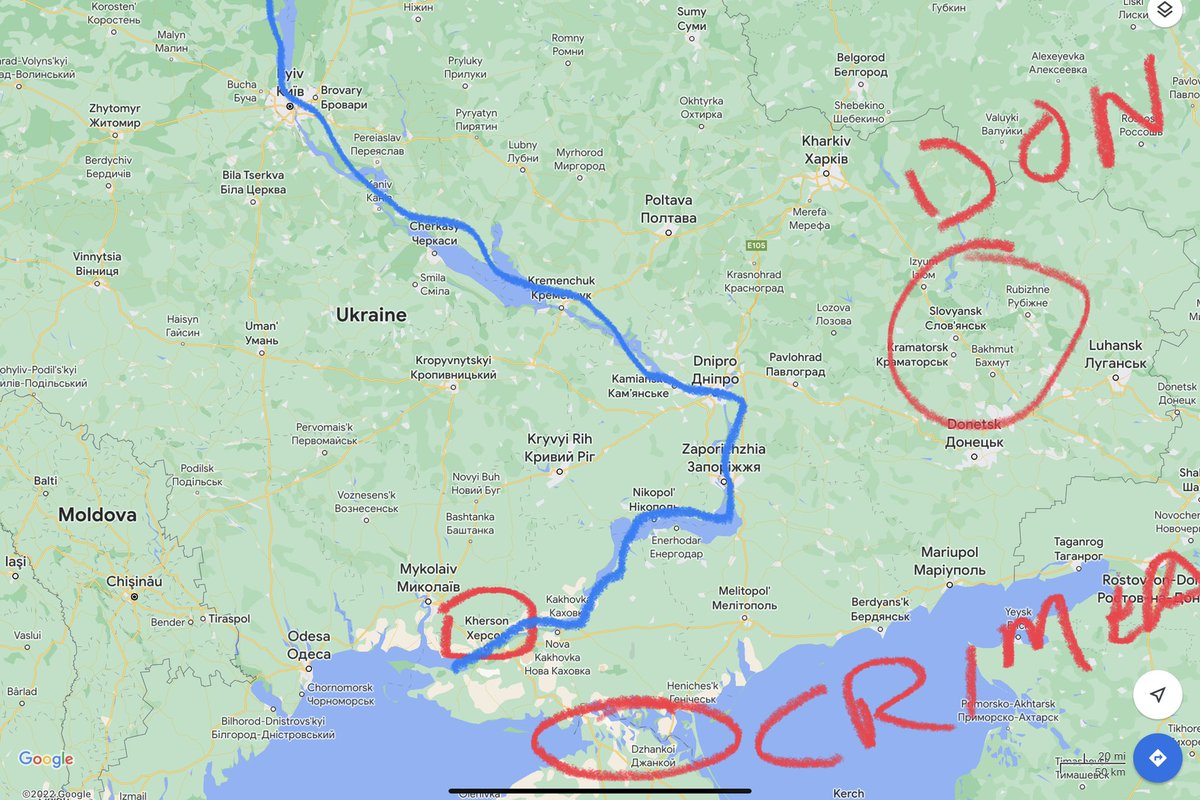 Previously, they had stripped out troops from elsewhere to do their offensive in the Donbas, and the Ukrainians took advantage of that and started nibbling at Kherson. Key point - the Russians don’t have nearly enough to do what they want to do, and the Ukrainians are exploiting that by holding the line on Russian attacks and then striking elsewhere. Then last week or so, the UA announced that they were starting their Kherson offensive proper. This seems to have been pretty successful. It pinned a lot of Russian troops the wrong side of the Dnipro River and means the UA can take their time.

But because the Russians had stripped troops out of everywhere else to reinforce Kherson, the Ukrainians sensed an opportunity in the north east in Kharkiv. And this lays bare a huge advantage that the UA have over the RA- interior lines versus exterior lines. If the UA (blue) want to shift axis of advance or reinforce look how short a journey it is compared to the Russians. 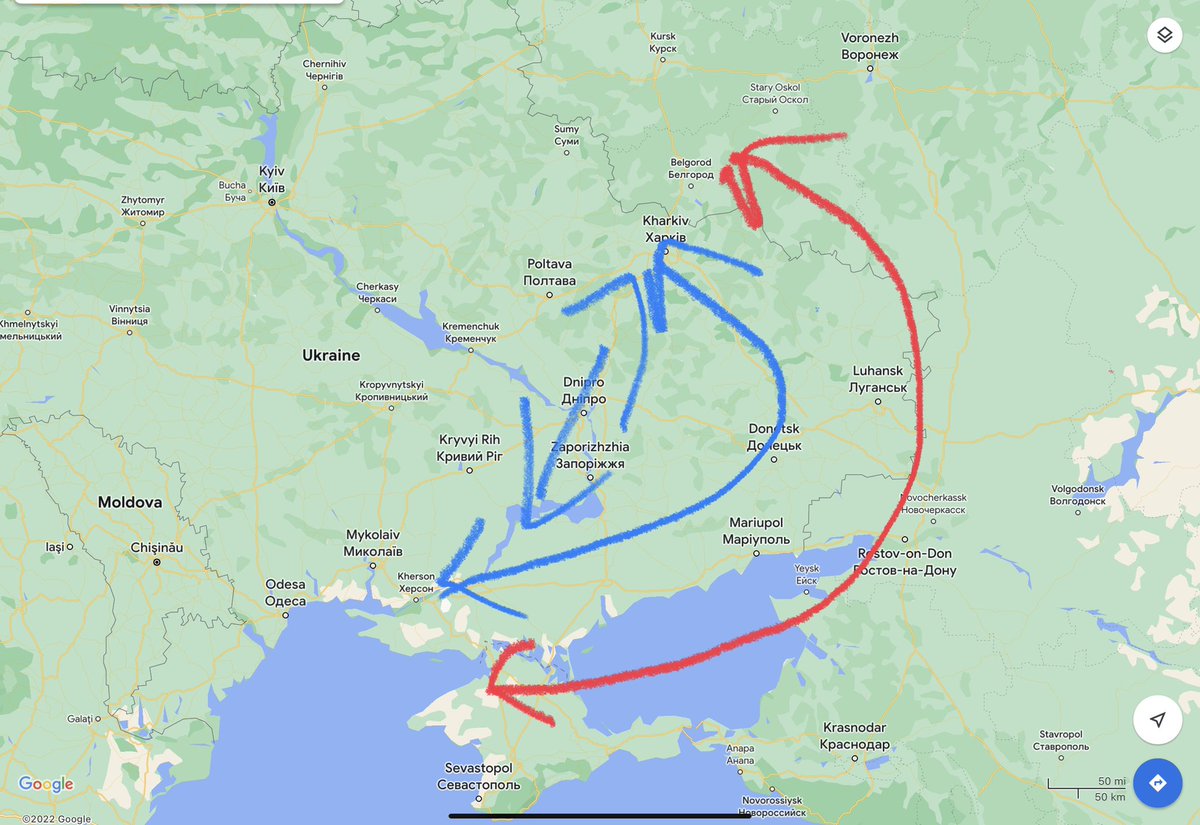 This gives the UA a SIGNIFICANT advantage in what militaries call balance - they can keep their force balanced and shift reserves or key assets around much easier and faster than the Russians.

So what is happening in Kharkiv?

Red is the RA front line. Red circle is Izyum which is a town the Russians need to hold for logistical reasons if they want to go further into Donbas. Yellow is a KEY railway junction and black is the railway from Russia down which all the supplies come. 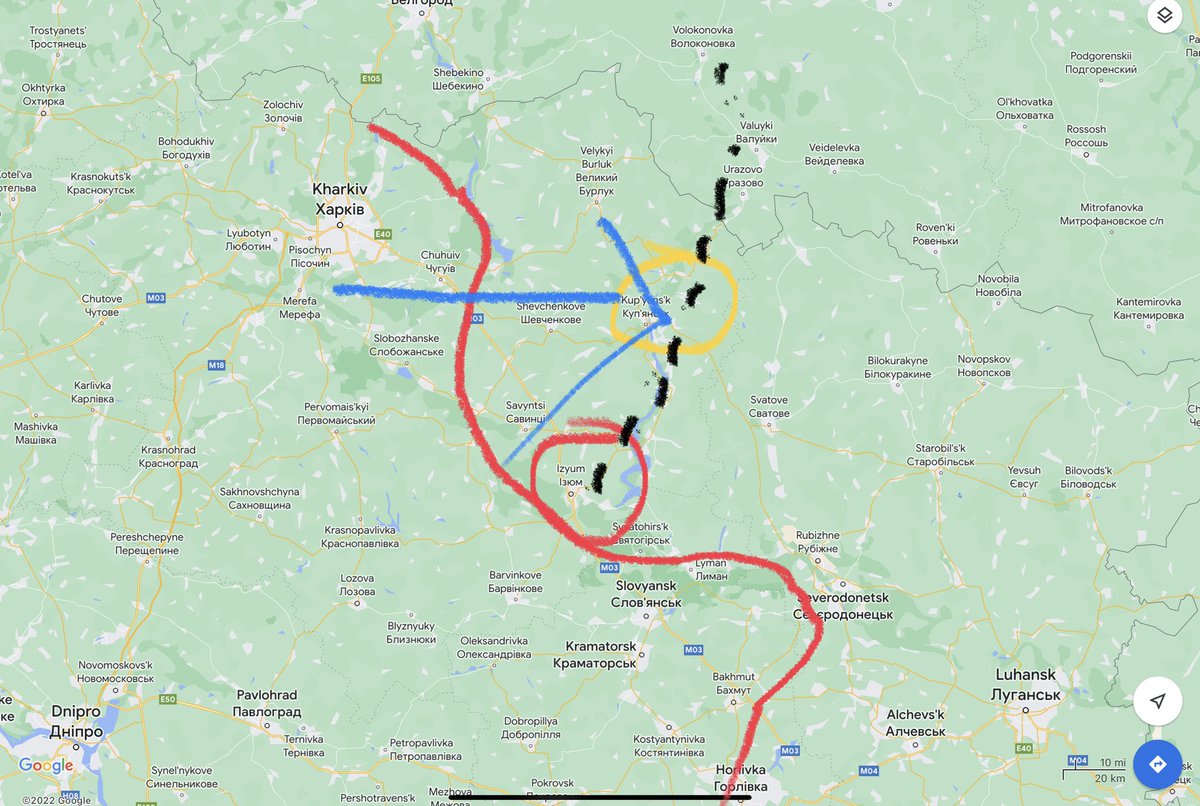 So as you can see, the UA are taking advantage of the thinned out RA front lines to try and capture that railway junction which will cut the supplies to Izyum, which will cause most of that RA front to continue it's collapse. If they pull that off it’s serious rout time.

But there is something also very interesting.

So why the difference in what the UA are allowing out from the two fronts? They are the masters of info ops (or at least have been so far in the war)

My guess is that Kherson is still the prize or main effort - more important strategically and lots of Ru troops trapped there in the blender.But they are releasing videos of panicking RA up in Kharkiv to overload RA decision making, and maybe force them to redeploy some assets. After all, Kharkiv is not a big front, the RA there can just retreat across the border. Donbas is more important to russia , and Crimea even more important still (Kherson is gateway to Crimea). And so looking forward, my prediction is that Kherson is the way to Crimea and Russian collapse, but the Kharkiv front is just a nice little side line that makes that easier.

Does Putin's regime ultimately survive this though. Remember, a small (limited) nuclear strike is still an option (for him).

There will be a lauch of a tactical nuke on Ukraine as long as Putin is in power!

Highly improbable. Russia knows that no single action would serve to galvanize global opposition against them more than using a nuke. Even if Putler went full retard and ordered such an attack, I have some faith that the power structure immediately beneath him, and those who would carry out those orders, would likely refuse.

I like to think so too. But every indication is that those in his immediate vicinity are terrified of him. He must have some leverage on each and every one of them (at least).

It's a full on kleptocracy with layers upon layers of graft and corruption. Not sure they would destroy their racket just to placate their little napoleon...

I know, but Putin isn't all there anymore. That along with a tactical nuke is a far cry from a stategic one, that's why we agreed no one should have em, threshold for detonating one is so much lower. Even CCCP agreed on tactical nukes was ... well to dangerous, now.... after Putin scrapped the inf treaty..... *shivers*

Tactical nuke can be fired without the stringent checks like on the big ones.... very short command chain. Read somewhere when deployed could be down to officer level.... some major alone, no codes, just a button.

nukes are for deterrence against other states

Agree with what you say as well as wanting to point out here; a limited strike could also be used to deter other countries from further involvement. He's certainly psychotic enough to try it. Thing is, how fearful is he of the oligarchs when he is also one of the suspects behind their falling out of windows. Don't tell me he wouldn't issue additional protection for the leaders of the big families during this time.

the way this war has been waged points to the opposite of Putin being psychotic. The Russian side has been too rigid & safety-conscious if anything. A more devastating war might have been over by now. Instead they're doing a 'special military operation' that seeks to preserve as many civilian lives as possible. There's a lot of criticism in Russia of them not going hard enough. They've barely touched any of the civilian infrastructure. Yesterday was the first time they went after the power stations & that seemed more like a warning.

Russia's shown no sign of using any kind of nukes in this smo besides as deterrence against existential threats. If they're going to escelate they'd pour in more troops & hardware & do basically what they've been doing already, maybe with more cruise missile strikes on infrastructure.

I can see it done as a show of force or to decimate a larger buildup of troops and cripple morale. Think of it as a MOAB in terms of yield, infact the smallest one buildt had the exact same yield and where supose to be carried by soldiers...people where crazy back in the cold war. Then you have the ever-looming accidental launch which still remains the most likely scenario.

Won't greenlight a nuke on any city, if that happens he's lost his marbles

Time will tell, extreme actions like that is not something you start off with, and we are "just" 200 days in.... JUST..... word leaves a really bad taste.

yesterday Russia fired for the first time on power plants

4 cruise missiles, all hit their targets & took out half of Ukraine's power & some of the internet, temporarily.

they have capacity for about 100 of those cruise missiles just in the ships they have on the Black Sea, they're just holding back for whatever reason & don't want to do that 'shock n awe' style of warfare but there's pressure on them to escelate now so soon we might see them open things up a bit. They're probaby gonna have to scale up their deployment regardless of this since they're currently out-manned by about 3-1 & Ukraine has all that shiny new NATO gear, plus NATO intel.

for the popcorn munchers, at least it's gotten interesting again.

yeah it's called terrorism......and quite gay...... latter is probably a bigger insult than the former!

it's standard NATO tactic, although they do it sooner & on much larger scale.

NATO's proxy, aka AFU, has been hitting Zaporizhzhia NUCLEAR power plant for months.

Now you're saying it's terrorism....... Big of you to admit NATO is a terrorist organisation.

Special operation out in backwater Ukraine?! Blowing up dams intentionally.... that full on total war strategy and a costly one at that.

the Kremlin's not even willing to upgrade it to an anti-terrorism operation let alone full scale war.

Busting that dam has been pretty effective in slowing any potential AFU advance in that area - it washed away some pontoon bridges & hampers mobility in general. It also seems to confirm they've tweaked their rules of engagement & critical infrastructure is no longer off-limits.

Quite a few Russians & pro-Russia watchers are jumping up & down wanting them to upgrade their posture.

Including you, right? russia has nothing left but to attack infrastructure. RU losses are catastrophically devastating and it will take them years upon years to rebuild and revamp.

" it washed away some pontoon bridges & hampers mobility in general" cool hot facts bro...pulled freshly out of your arse

"they have capacity for about 100 of those cruise missiles just in the ships they have on the Black Sea, they're just holding back for whatever reason & don't want to do that 'shock n awe' style " FACTS!

There is no way that you, or anyone outside of a national intelligence agency would know how many of "those cruise missiles" russia has in their black sea arsenals.  Go ahead, site a credible source. We will wait.... 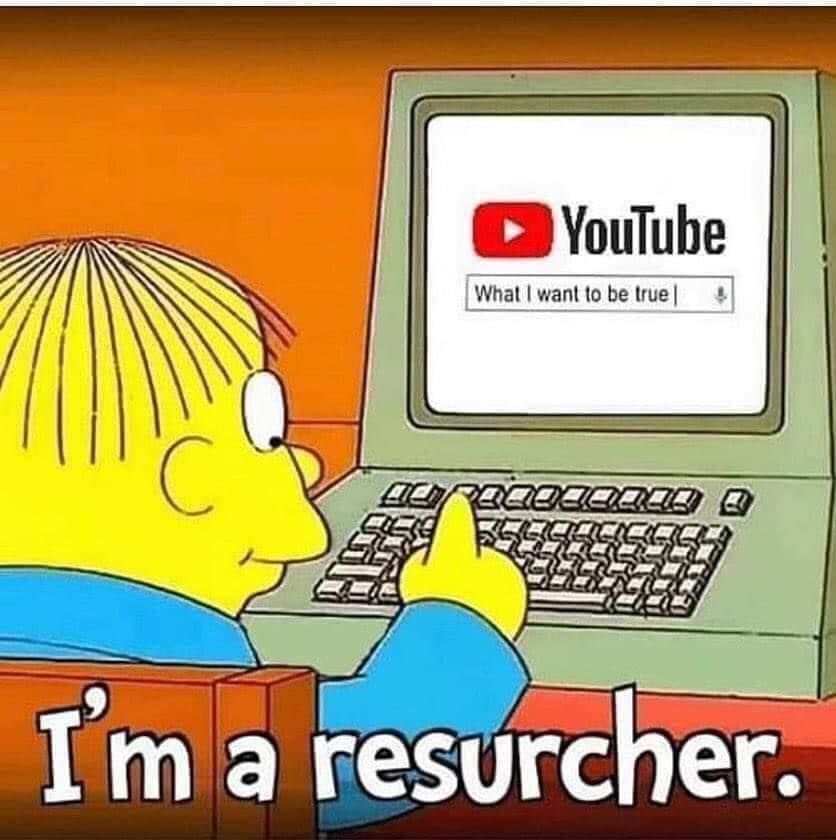 once again you're letting your emotions get in the way of your reading comprehension.

let me know when you learn what cruise missiles are used for.

This a representation of the self-depreciation going on as i write this! While simultaneously trying to deflect some of the stupid away from my comment!